Even though I’ve vowed to boycott Kotobukiya’s model kits, the Alteisen Riese model actually looks somewhat more promising than the rest of its line-up so I picked it up. After building the Cybuster and the 1/144 R-1, my expectations and respect for Kotobukiya’s SRW line dipped.

If you’ve played SRW OG or Impact before then you definitely know Kyosuke and his Alteisen “Alt-chan” (courtesy of Excellen) Riese and how it is oh so much fun to drive that stake into the enemies again and again and again, turning everything into “alteisen” itself… it’s either that or abusing the Rampage Ghost attack. The riese has also grown into one of my all-time favorite OG mech as well simply by how it functions as a different kind of Real compared to the other Real mechs.

Alright, enough overview. On to the stuff… *cues 浩鉄の孤狼*

Maybe this is one of the reason why Kotobukiya’s kits are more superior than Bandai in plastic quality.

Believe it or not, this kit comes with 21 runners of parts (well, maybe 20 if you don’t count the small ones) and it seemingly has more parts than smaller MGs. I like how Kotobukiya paints in the face. Look! no nubs on the Revolver Bunker’s stake!

The instructions are similar to Bandai’s but different in format; instead of being seperated into sections, Koto just numbers everything “in one go”. Doesn’t make any difference really. The nice part from Koto is that the runners map is on a seperate sheet so you can easily use that to find the runner you wanted until you familiarize yourself with the parts.

First off, the plastic is cheap. You can see and feel it. Just NEED to get that out there. If you’ve been handling Bandai’s plastic all these years, then you would most likely go “WTF?” with Koto’s. It’s like made out of the same plastic that bootleg toys are made out of. It’s also not very smooth as I noticed the Gundam marker doesn’t run as well on it; the ink breaks and smudges. I’ll also point out inconsistencies down the review.

Oh man… assembling this model was actually very time-consuming. Although there’s nothing particularly hard or confusing, this kit just have so many tiny pieces that make up little details and stuff that wouldn’t have made any difference if it was molded together. I feel this is a case of quantity over quality. 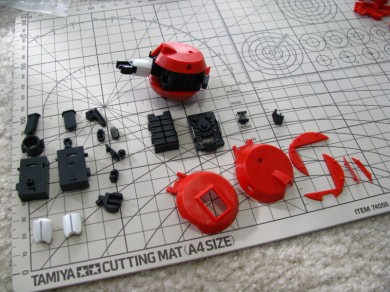 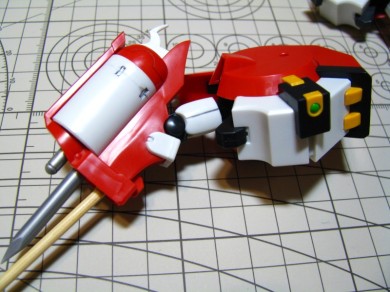 The arm took a long time to put together… like longer than any arms I’ve assembled for a MG model. the amount of bits and pieces are ridiculous and it doesn’t even have an inner frame! Then again, there is a lot going on for these parts like.. hmm, all of its weapons here. The shoulders are the same on both side but the arms are completely different, even in the ways they connect to the elbows. I took the time to paint some parts like the Stake ammo, thrusters (gunmetal from black), the green detail on the left arm, and others.

Inconsistency: Okay Koto… so you can be kind enough to paint the green dot on the Claymore’s yellow buckle (just on that part only; I had to paint in the green on the other parts), and included all the tiny yellow bits for detail accuracy… YET you can’t even mold the thrusters in the right color?! It’s the same gray as that cartridge on Alt’s left arm! Why you ship it out in black?! 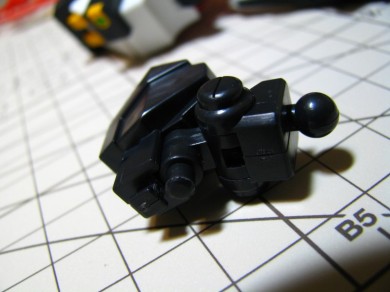 Not as obnoxious as the arms and fairly simple. If you’re used to Bandai’s ways then you might be a little surprised at Koto’s engineering like how they design the parts to go together such as the knees; the thigh slides into the knee like a drawer. I thought this might be an issue but it worked out well since it’s VERY stiff and snug *cough fitment issues cough*

The ankle is rather interesting- in addition to the “ball and socket” connection, the feet also rotates to the side on a peg (see last pic). Where have I seen this concept before?… ah yes, The 00 Gundam I think. This kit came out first though. I like it… if it weren’t for its design, Alt-chan could do the splits while still having its feet flat!

The head looks really good and well designed. I had to paint in the white part below the “ears” though. 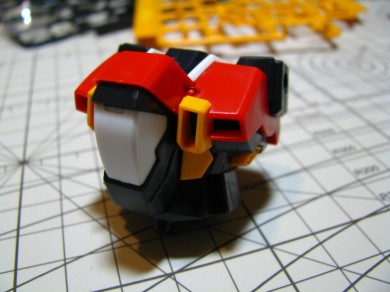 This is a very MG-esque body, straight with the cockpit doors, tilting waist and shoulder connectors but the funny thing is… since there is no inner frame or detail, this body actually has no gimmicks. All the little parts just make up the whole picture.

Nothing noteworthy here. Just build and move right along. The only problem I see is that this “backpack” is actually a bit on the heavy side and it just connects to the back through two ~1 mm long plug… 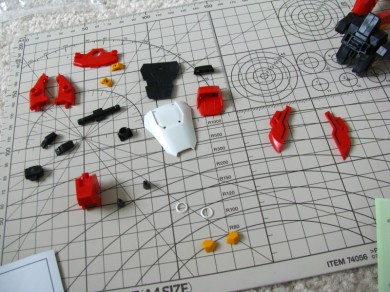 Just realized I didn’t take a photo of the completed part… but anyway, the waist is very similar to MG model waists but just build differently. The nicer part about Koto’s design is that the side skirts are clipped on so you don’t have to worry about it popping when moving the legs.

For some odd reason, Koto saved this as one of the last steps instead of doing it with the shoulders. This is the only part with the most color inaccuracy since it’s all in red when it’s supposed to have yellow, black and white as well. I didn’t have white and black so I just paint the trim with gunmetal and it worked out okay.

Inconsistency: Again, how are you nice enough to include the colored bits, big and small, for the REST OF THE BODY… yet left out this segment? I might be nitpicking but with all the other parts getting the correct detail parts, why leave out just one? 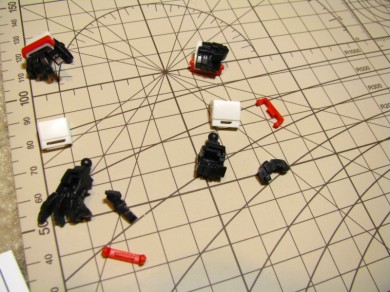 Aside from the color inconsistency, I also noticed that there’s a lot of fitment inconsistencies as well. Like how parts on one side fits smoother/better than the other side (front armor skirt). Some parts were so hard to fit together (shoulder binders for example) that I actually left white stress mark on the other side. The fit and finish quality of this kit is definitely a bit on the low side but thankfully, that didn’t affect the overall playability of the model.

Another odd thing I noticed was that Koto like to use a lot of different shapes for peg connections : L, T, squares, triangles, U, and most of the tetris shapes instead of keeping things simple like Bandai. I don’t see the point of this because it’s not like it’s any more effective than the basic round pegs. It really isn’t.

Took whatever leftover Gundam marking stickers I can find and applied them then drowned the thing in Mr. Flat Coat :D 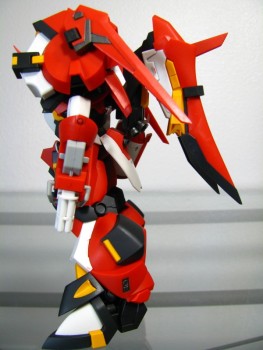 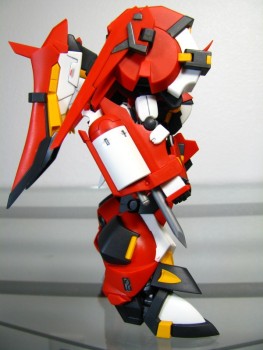 Before applying the top coat, the model looked like a damn toy since the whole thing was made out of cheap plastic. After the miracle spray, this thing actually looks like a model and it is FABULOUS! Overall, the model is an impressive sight (top coat or not) thanks to all the little bits of details here and there and being faithful to a great mech design. It is also very sharp too (literally)! 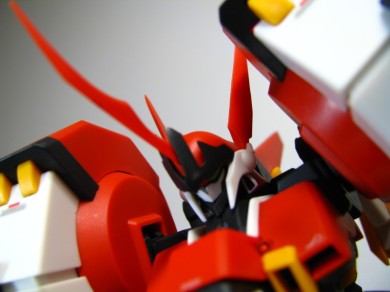 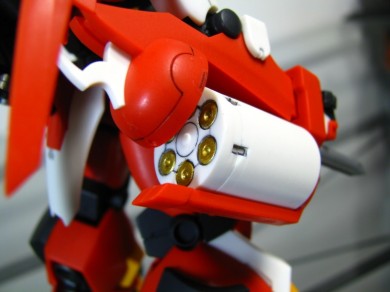 Just close-ups of stuff I’ve done to it: mainly painted all the thrusters gunmetal, the bunker ammo, and the warning stickers. 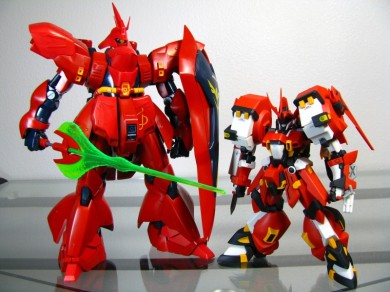 As you can see… the 1/144 Alteisen is quite small compared to MGs.

Let’s see how the upgraded Alt-chan does in action… 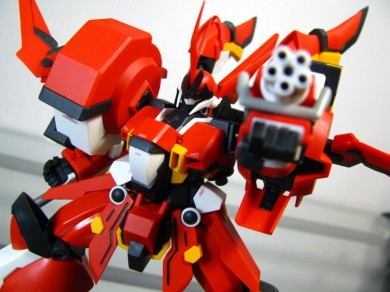 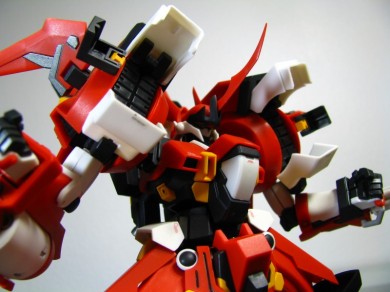 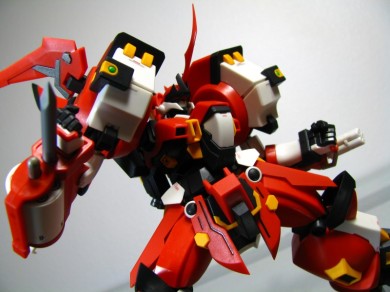 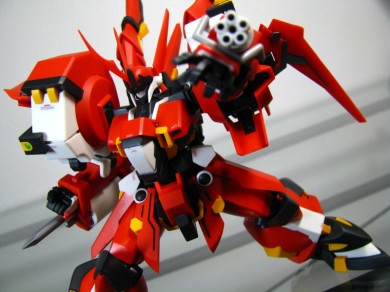 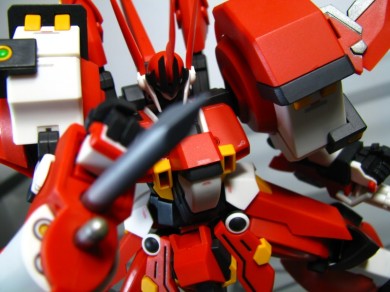 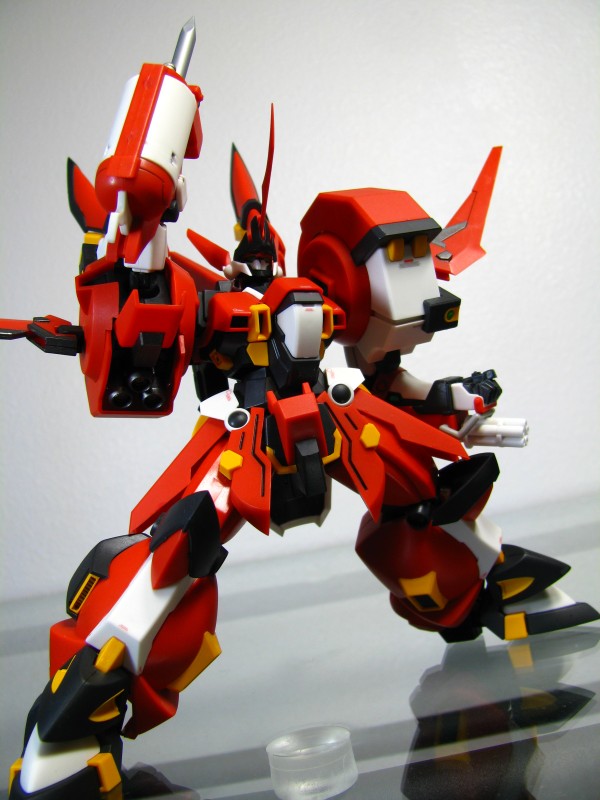 That one pose Kyosuke loves to do so much… 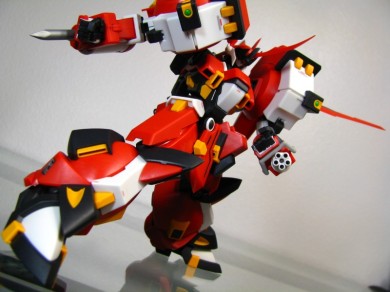 If there’s one thing awesome bulky mechs can do that anorexic Gundams can’t is evoke “Power” through its stances. Being “muscular” (instead of calling it bulky), the Riese can just look powerful and towering just standing there and emits a dominating presence in dynamic poses. This is why I love the Alteisen Riese and Kotobukiya did not screw this up. I don’t know how much I would rage if they gave Alt-chan the same garbage treatment they did with the 1/144 R-1(its articulation is equivalent to that of NG 1/144 Gundam models… only double the price).

For the negative side… where to start…

-Okay, the shoulders (claymores) and tail binders do obstruct each other and the head from time to time if things get too dynamic but this isn’t much of a problem really.

-The backpack is really heavyand can drag Alt-chan down if balanced improperly. Connection with the back, as expected, sucks because of really short plugs.

– The arms can seperate very easily from the body since it is also connected through a simple short round peg plugged into the body.

– This is the worst: The right elbow SUCKS. Thanks to the way it is designed (forgot to take pic), it can EASILY be pulled off accidentally. This is because the elbow is connected by an upside-down “L” peg,; think this: when the arm is fully extended downward, the peg that connects the elbow is actually horizontal instead of vertical so if you’re rotating the elbow, the peg can easily slide right off.

I’m certainly happy with this model and really enjoyed playing with it but it still doesn’t change my mind about boycotting the rest of Kotobukiya’s stuff until they work out the quirks. Simple as that. If you’re going to get this kit, I strongly suggest you paint it with Tamiya Flat Red (I used it to hide the nubs). It is the most accurate red to Alt’s red but better. If you just wanna spray top coat on it, then I strongly recommend you spray on the pieces or the runner first as you go along since the Alt have so many overlapping parts after it is completed. It is more thorough that way. Now to sum up this review…